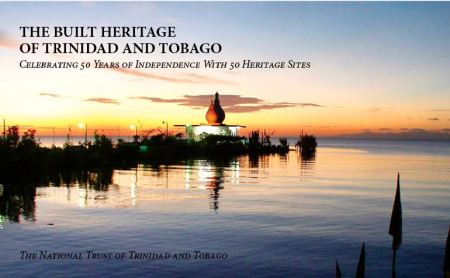 Buildings may not, on their own, make us who we are, but they can provide some of the best signposts and symbols for us to understand our history and ourselves. This is one of the core messages that resounds in The Built Heritage of Trinidad and Tobago, a publication timed to coincide with our nation’s fiftieth anniversary celebrations.

Boissiere House, one of the 50 heritage sites. Photo by Wyatt Gallery, for The New York Times.

Presided over by editor Geoffrey MacLean, one of the region’s leading conservationists and a National Trust member himself (as well as premier historian on Michel-Jean Cazabon) the book highlights fifty important landmarks of local architecture. These include structures that those who work in Port of Spain and its environs see on a daily basis: Woodbrook’s Lapeyrouse Cemetery; the Cathedral of the Immaculate Conception on Independence Square; Queen’s Royal College on Maraval Road. Also highlighted amongst the fifty edifices are structures and their sites that are less commonly glimpsed, unless one ventures off the beaten path: the Shiva Mandir in Reform Village; Our Lady of Montserrat R. C. Church in Tortuga, Caroni; the entirety of Nelson Island, off Trinidad’s northwestern coast. (Worth noting: this architectural anthology also features ten Tobagonian heritage sites, such as Fort King George, the Providence Aqueduct and the Mystery Tombstone.) 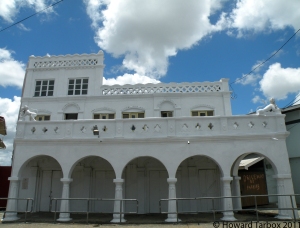 The Lion House in Chaguanas, another of the 50 historical sites highlighted in the book. Photo by Howard Tarbox.

Its cover proudly bearing the image of the Siewdass Sadhu Hindu Temple-in-the-Sea at Waterloo, The Built Heritage of Trinidad and Tobago stands solidly by the national pride that Sadhu’s pioneering feat of architecture represents. Impeccably researched, with detailed information accompanying each historical setting, this is a collector’s item in the vein of the Azrieli School’s books on Trinidadian architecture, discussed earlier on the blog. It marries our earliest recorded efforts at constructing our legacy, combined with the conservationist zeal necessary to ensure that this legacy is safeguarded from wrecking balls that herald glass and chrome facades.