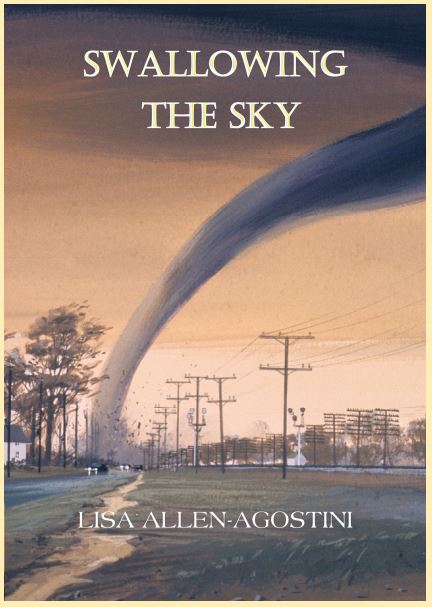 Confessional poems are often bleak and beautiful, wrapped up with honest and complicated hopefulness. In her newest collection, Swallowing the Sky, Allen-Agostini champions a strong poetic voice mired in such admission, one that’s borne bitter regrets, and emerged on the other side of harrowing landscapes. If life is a permanent gayelle, poems such as these are prepared to do battle in those confines. These verses ring out in celebration of fresh loves and sharp-suited new romantic possibilities, delving deep into the scar tissue of family secrets, seeking and stating truths with confidence and clarity.

In “Pathology”, the collection’s opening serving, the poems are both armoured and made bare by honesty: a family’s history is levelled at the reader for examination. With rawness unafraid to take its own measure on the page, brutalized femininities and the braggadocio of male swagger take root. These are legacies usually secreted beneath blameless antimacassars, but Allen-Agostini razes those gentilities to the ground, in movements such as “VIII: beast”:

“his cold eyes lit up to see me
his double, his shadow
never raised his hand or voice to me
though he beat my mother, called her
every kind of stupid
had women
even married one

but built my mother a house brick by brick…”

Nothing less than the undiluted marrow of life lines the insides of such verse, which, as the poet herself describes, makes for the hardest fare. In “Living”, from the collection’s third arc, the narrative voice is triumphant and wise to time’s caprice, as it proclaims:

“Living is the harder thing
not picking clumsy poems out of life. […]
Living is the art
the trick of holding your breath
til the poison dissipates…”

There is no mean craftswomanship in moulding such pain-tinged experience to form and structure, in ways that do not sully their first flush of feeling. Swallowing the Sky does this, and more – it suggests the fullness of a life that can summon poetry as its alchemizing, cleansing relief. 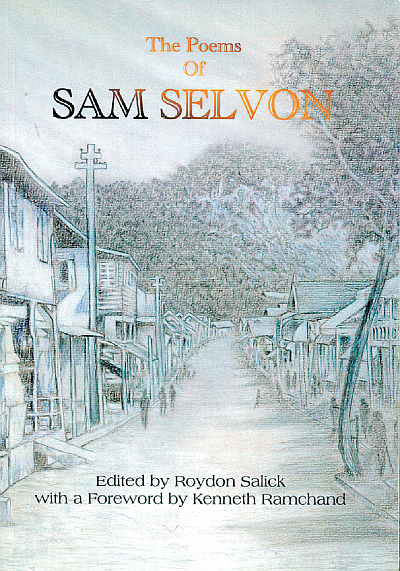 Reducing a knowledge of Sam Selvon to A Brighter Sun would be as detrimental as recognizing V. S. Naipaul simply for Miguel Street, or Earl Lovelace for The Dragon Can’t Dance alone. Yet, many readers of Caribbean literature, including those who pride themselves on being well-read, have barely even heard of Selvon’s poetry, making this collection as vital as it is long overdue.

Issued by Cane Arrow Press in 2012, The Poems of Sam Selvon has been collated painstakingly by Roydon Salick, a Trinidadian critical scholar whose previous publications include The Novels of Samuel Selvon: A Critical Study. In a foreword to the collection, penned by fellow Trinidadian scholar, Kenneth Ramchand, Selvon’s poems are described as being “worth attention whether you are a Selvon scholar or not.” Ramchand adds persuasively that “…if (Selvon) had written nothing else, this collection would establish him as a considerable poet, a relevantly West Indian one, and an original.”

What the collection reveals is that, unbeknownst to those who weren’t paying attention (or perhaps weren’t yet born!), Selvon’s poetry has been around — published in various literary journals, including Bim and Savacou. With the principal selection of poems having been printed in the Trinidad Guardian newspapers from 1946 to 1949, Selvon’s poems have undoubtedly existed in the literary landscape of both home and abroad. The poems themselves reveal the development of a keenly thinking mind, one concerned with identity, voice, the immigrant experience, and the pains of love and death.  They are recommended reading for university and secondary school students, and for those who want to learn more of Sam Selvon, beyond the banner of his more celebrated works.

For more information on Cane Arrow Press and their publications, you can visit their official website and browse their catalogue.

Anthologizing the poetry of Trinidad and Tobago is a noble undertaking, and one for which it seems not many publications exist. Difficult as it may be to provide a comprehensive guide to the nation’s poetic heartbeat, this new collection puts forth a valiant effort. Edited by Ian Dieffenthaller and Anson Gonzalez, published by Cane Arrow Press in 2012, 100 Poems from Trinidad and Tobago feels like a work that’s long overdue. It presents pieces from a diverse selection of writers, including a handful of fresh and promising talents, alongside well-established veterans.

In her Trinidad Guardian Sunday Arts Section interview with Ian Dieffenthaller, Lisa Allen-Agostini takes note of the co-editor’s hopes for a generous portrait of Trinbagonian poetic identity. Dieffenthaller is quoted as saying:

“The collection was chosen to reflect as many constituencies that I could identify and do justice to. I’m not saying that we’ve covered every root and branch but we did our best. […] After 1970 it’s virtually impossible to choose a representative sample. So much stuff was written after that so we just chose what we felt would fit that bill of T&T provenance.”

Prefaced by a comprehensive introduction that’s written by Dieffenthaller himself, 100 Poems from Trinidad and Tobago recommends itself as a must-have for anyone interested in seeing how poetry lives in our society: the ways in which the form, and its concerns, have both changed and remained essentially the same.

For more information on Cane Arrow Press and their publications, you can visit their official website and browse their catalogue.