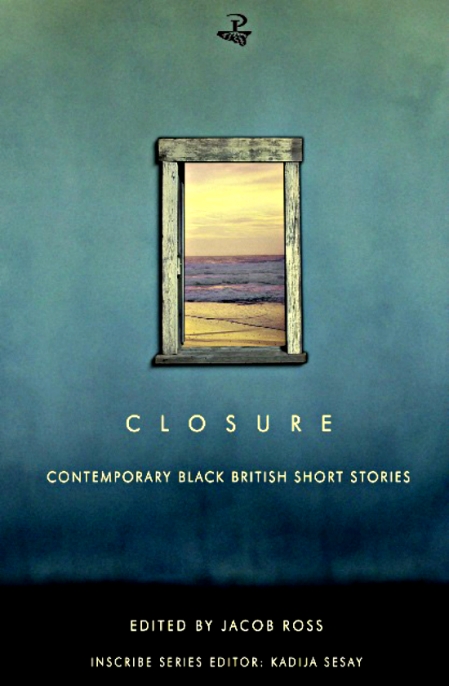 Welcome to the 2015 Paper Based Advent Book Blog! On Day Eighteen, we take our first official #paperbasedadvent trip outside the Caribbean libraries in which we’ve been lingering, and travel across the Atlantic, where a wealth of short fiction in black literary voices is being produced, addressing concerns and investigating cares that resonate with marginalized, diasporic voices everywhere: Closure: Contemporary Black British Short Stories, edited by Jacob Ross.

Released fifteen years after IC3: The Penguin Book of New Black Writing in Britain, Closure resumes the mantle of exclusively black British writing that that first title ingrained, but with a newer, differently interrogative focus. Black and South Asian voices in the short fiction of the United Kingdom are not a niche-genre amusement; they are part of the bedrock, of Albion’s very foundational garments. If IC3 fostered an understanding of this essential truth by its publication in 2000, then this innovative, quandary-battling anthology deepens the well of such storymaking possibilities.

In these short fictions, the environment — the boroughs and enclaves that demarcate London and beyond — seeps into the casual glances and sharper cognizances of its dwellers. Each of these characters is as much a product of their own versions of England as their clandestine closets of desires, their evil or enviable deeds. Monica Ali’s “Contrary Motion” traces the steps of a focused musician’s ambitious progress through her pupils’ lives, seeing its protagonist striding along streets that form the heartbeat-echoing backdrop of a diverse neighbourhood. Her perception of her Tapham environs tells us volumes about her litany of judgements, cleverly tucked into the author’s bird’s eye view:

“She caught the bus back from Halting Village, the genteel ghetto where most of her pupils lived, to Tapham, a fifteen minute ride and a world away. Here Somali and Kurdish refugees clogged the tower blocks, and the artistically or socially enriched but financially challenged restored their subdivided Georgian properties and wore organic clothing.”

Housing previously unreleased work from Leone Ross; Koye Oyedeji; Desiree Reynolds and a chorus of other bright fiction writers who are both veterans and nascent talents, Closure is a clever countermanding of the restrictive values its title suggests. These stories are migrant’s tales; from parents, physicians, and patriots of many flags — each of them inventing ways to breathe as members of a nation filled with contrasting lights.

We recommend it for: fans of Bernardine Evaristo’s Mr. Loverman and Monica Ali’s Brick Lane; readers of IC3 who’d like to see how such stories have evolved and deepened from one focused anthology to the next; enthusiastic viewers of Andrea Levy’s ITV-adapted Small Island, starring Naomie Harris and Benedict Cumberbatch.