With the long vacation more than halfway done, little readers are already anticipating their return to classrooms, chalkboards and copybook assignments – some with pleasure, some with dread. Take heart: there are still a handful of weeks left to be filled with lazy, sunny days of reading! We’ve selected three titles to enchant junior bibliophiles, while simultaneously charming the adults who are narrating these adventures in words and pictures to their toddlers.

Johnny, an energetic tyke, dislikes constraints of all types – particularly those including buttons, zippers and all fabric! His parents are hard-pressed to keep him dressed, and none of their defenses of attire seem to register with Johnny’s perpetually nude frolicks: so what happens when Johnny’s mom comes home one day with a pair of overalls designed to snap on… and stay snapped shut? Young Johnny violently reacts to being trapped in his confining new threads, and it’s up to his father to suggest the possible merits of being clad.

Olive Senior adds this exuberant, joyously-infused tale for wee clothing anti-enthusiasts to her impressive writing repertoire. Her colourful, effervescent prose meets a perfect complement, in Eugenie Fernandes’ vivid illustrations. Ideally suited to children between the ages of three to six, Birthday Suit can doubtless be enjoyed by young readers out of toddlerdom, as well as anyone who still secretly chafes at the thought of donning a business suit!

Intrepid young Kafiya dreams of a closer bond with her favourite figure of fascination in the night skies: she wants to talk to the moon. When her Grandma Etta divulges that the moon has a face just like Kafiya’s, the young girl is determined to see this for herself. She goes in search of this moon with a face, and is delighted when her late night conversations with the moon confirm all their similarities.

Janet Campbell’s debut book hearkens to the nascent fascination of so many children, portraying the moon as a friendly, compassionate being, Anais Lee’s illustrations render the dreamy, thoughtful exchanges between Kafiya and the moon with graceful lines and a series of gentle pastel tones. A sweetly affirmative invitation to engage with the world around us, Kafiya Meets the Moon makes for ideal before-bed reading: it’s the perfect precursor to a little girl’s nocturnal rambles with certain, captivating heavenly bodies. 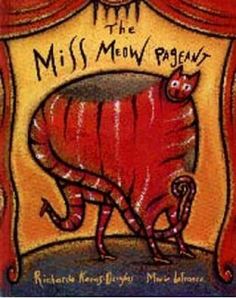 Sparrow, Henrietta’s cat, might be considered one of the neighbourhood’s least attractive cats, but his owner doesn’t love him less, despite his apparent lack of comely appeal. Henrietta and her friend Len decide to enter Sparrow into the Miss Meow Pageant, a feline contest which boasts some coveted prizes. Training Sparrow up for the contest isn’t an easy road, but after a few trials, the calico is finally ready — will the Miss Meow judges favour him with the winning sash, or will Sparrow continue his reign as the least handsome kitty to ever saunter onto a pageant stage?

Keens-Douglas’ fifth title for young readers packs as much gaiety and superb storytelling mirth as his previous four offerings. His stalwart aficionados will be thrilled with the briskly paced plot, the several moments that give rise to peals of laughter, and the valiant progression of Sparrow himself, a most unlikely protagonist of many stripes and shades. Marie Lafrance’s drawings are boldly outlined, and possess an infectious off-kilter spirit that weds itself seamlessly to the uniqueness of this irrepressible slice of Keens-Douglas storytelling.

We particularly loved these three children’s literature gems, and we’re looking forward to delving into our substantial treasure trove of featured titles at Paper Based, to serve you up another merry assemblage soon!

Love, queer black love, will flourish in even the most violent of regimes.
🏆 Longlisted for the 2021 OCM Bocas Prize for Caribbean Literature 🏆
Shocking. Searing. Set your preconceptions aside; this novel will shatter them all.
Dear book lovers and friends of Paper Based, 34 feels truly fantastic in your company! Though nothing has been 'normal' about the past year, your stalwart enthusiasm for reading Caribbean has kept us going in spirit and custom, and we couldn't be more thankful. Until we can all gather safely for our signature Evening of Tea and Readings, here's to another 34 (at least) on your bookshelves, TBRs, shelfies and hearts.